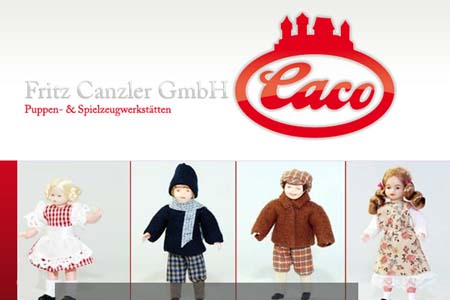 Two firms with rich histories meet each other in 1970. Caco dolls from the factory Fritz Canzler en we started also in 1870! At the beginning of the 20th century the gentleman Fritz Canzler started a export and trade business for toys. Due to permanent delivery problems with his provider, Fritz decides to start his own production of dolls and doll clothing. In the years after the first world war the gentleman Canzler met the gentleman Hans Hoffman from Sonneburg/Thuringen. From him came the idea of the little bending dolls, and they decided to work together from then on. This is how the firm Canzler and Hoffman was founded in 1942, in Sonneburg/Thuringen. In the same year the first dolls were produced and in 1925 the product “Caho” followed, it stands for Canzler Hoffman. Shortly after that the first bending dolls were released and sold. In 1939 the firm Canzler was at the stock exchange in Leipzig to sell toys and Christmas decorations. In 1945 after the war Fritz moved to Oberlind/Sonneburg close to Neustadt/coburg. Here in the American territory Fritz Canzler re started the production under the brand name Fritz Canzler & Hoffman, they only registered in the chamber of commerce in 1948. A couple of years later Fritz moved again this time to Coburg, here Fritz built and a house with a production room in 1953. Because of the move the brand name changed again to “Caco” which stands for Canzler-Coburg. In the first couple of years the head of the doll was made from a special type of material, and the hands and feet poured from lead. Because of the stricter rules, especially on the important USA market, the production changed to plastic heads and plastic feet/hands. This because lead was no longer allowed to be used for children toys. At the end of the 70s Fritz Canzler decided to sell the company. It was sold to the children of the family Hausser. The firm was then moved from Coburg to Neustadt not very far away. The brand name “Caco” was so well known by now that despite the move the name remained for the little bending dolls. Next to the already existing assortment with the plastic heads, the customers also started asking for dolls with porcelain heads. Mostly for the collector and special occasions. In the middle of the 80s Madame Ingrid Berndt-Hausser took over the reins from her cousins, and since then she is the manager/owner. The tradition of the dolls that followed, was that every doll was made lovingly and homemade and working with local providers in Germany. The head alone gets more than 5 treatments, till the fluid plastic can be molded into a typical, realistic and unique Caco doll face. The bodies of the dolls till today have been made according to the designs of Canzler & Hoffman. Because of this the dolls can make all the human movement just like the earlier dolls. For this there are also more than a couple of treatments necessary, until you have a free moving Caco doll that are dressed both modernly but also in the nostalgic style of the past. All the clothes and outfits are designed in the firm itself and also made there. Step by step the assortment grew to include wooden and reed products. These products too were made through the same policy from the firm in the region and at Canzler they are refined using handcrafted dolls and accessories. In the mean time the product spectrum includes more than 400 different doll designs and they have been divided into a scale of 1:12 and 1:17. As opposed to the dolls with porcelain heads for the collector the dolls with plastic heads are from the age of 3 upwards. Due to the large assortment of doll designs, there are themes such as knights, strange cultures, carnival or Christmas figures, the children can let their fantasy run wild. Since half way through 2011 the next chapter in the firm is being entered. Exciting, how the firm Fritz Canzler GmbH will stay true to their motto “Tradition and modern” in the coming months and the changes it brings. At the firm Hesemans in Breda they sell, 100 years after the foundation of the well-known shop, since 1970 the doll house dolls from “Caco”. In 1986 they themselves go to the stock exchange in Neurenberg to buy the dolls where Fritz Canzler has been for years. Canzler in the mean time has been at the stock exchange for more than 60 years. At Hesemans they not only have a large assortment of the plastic “Caco” dolls but they also have the dolls with the porcelain heads and the accessories such as cribs and prams in the ratio 1:12. You can be thrilled by the traditional yet modern articles. © Hesemans Breda 2012