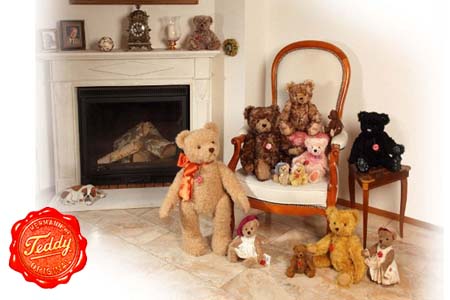 The cradle of the Hermann teddies stood in the little mountain village Neufang near sonneberg. Here in the middle of Thuringer toy land Johan Hermann (1854-1919) was a stay at home dad. Her decided to stop this and started in the up and coming production of stuffed animals (1912). The forefather of the in Hirschaid located enterprise is Bernard (1888) Johan Hermann’s oldest son. After a exchange course in Sonneberg and a short working time in his father’s company he moved to Sonneberg shortly after his marriage to Ida. In regard to his initials he named his company BE HA. He took on a couple of men and women and started with the production of teddy bears and dolls. Sonneberg was at the time the centre for the toy industry. Bernard had four sons who followed a course for industry and exchange in Sonneberg. His son Werner shortly after went to art school there he learned to draw and mold. In 1948 Bernard moved his company together with his sons out of the sovjet zone to Hirschaid. Here his enterprise grew into one of the better known of its kind. This is also where the name Teddy- stuffed toys Hermann K.G was introduced. When Bernard Hermann died in 1959 he left behind a flourishing enterprise with a reputation for its stuffed animals and its teddy bears. The current leadership resides with Marion Mehling, the daughter of Werner Hermann, and Margit Drolshagen, the daughter of Arthur Hermann. Her sister Traudel Mishcner- leads the design section. The changing of leadership happened at the moment that teddy bears weren’t only important as toys but also as collectibles. Teddy Hermann is one of the first that played into this trend. In 1986 they released their first limited edition. Since then the limited editions, replica’s and new editions have played an important role in the program. For these they have very high quality standards. A lot of it is made by hand, mostly from mohair and filled with woodwol. A lovely addition is that in the past years they have had bears designed by famous bear makers. In Traudel Mirschner they have a contact point and a colleague. Their designs have often been nominated for the Toby award. Also the figurines are collected a lot. As an alternative people can still get the Hermann Teddy collection which is produced elsewhere but still according to the standards. Traudel Mischner- Hermann

Teddy bears have always played a big role in her life because she was born into a family who have been making bears and stuffed animals since 1912. This is the family that started the well known Hermann-Teddy factory. From 1960 to 1962 she went to the graphical university for ceramics and designs in Neurenberg. Her most important goal was the design of animals, which is an important requirement for the production of three dimensional models. She worked with her uncle Werner Hermann who for a long time was the most important designer for the company. In her opinion it is her duty to continue his work. Since 1985 she is responsible for the new designs and quality checks. “it’s so great to design new bears and models!”. A lot of the time there is a characteristic teddy bear on her desk which she doesn’t quite want to let go and takes home. “Bears touch people’s hearts, they’re irresistible”. The original Hermann- Teddy bears are handmade in Hirschaid. They use German and English mohair and a couple of bears from the Hermann-Teddy collection are still filled with woodwol. All the noses are embroidered by hand. “We make a top quality product which we are very proud of”.