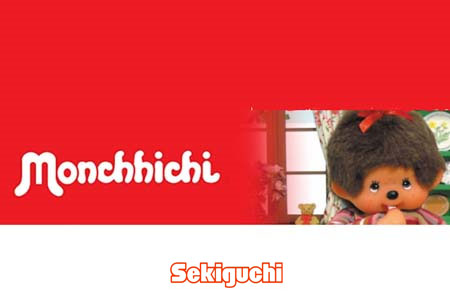 Monchhichi is one of many wonderful toys from Sekiguchi toy factory in Japan. Besides these cute little monkeys Sekiguchi also produces fashion dolls, collector dolls, plush animals and many other toys. The Sekiguchi headquarters are located in Tokyo Japan, at the same place where everything started in 1918. Mr. Sekiguchi (the grandfather of the current owner) started with the production of celluloid toys (a kind of plastic). With this material it was possible to create many shapes, such as: heads, bodies, legs and arms, so that they could start to produce dolls. One of the Sekiguchi product lines are the GéGé dolls. Ge Ge dolls have delighted collectors and fans. In the early 70’s Mr. Sekiguchi had the ambition to create a product that would deliver a message of Beauty and Love. The Monchhichi Idea was born, and very soon prototypes followed. At the end of 1973 the development was completed and since then, many millions of children and adults have taken the Monchhichi message of Beauty and Love to heart. The name Monchhichi comes from the French word “mon” (meaning “mine”)and “petit” (“small cute thing”) Also they got the hint of “mon” from the English word monkey, and the sound of sucking on a pacifier like “chu-chu” in Japanese. So they mixed them all together and became “Monchhichi”. Monchhichi was born and is one of the most well known brands in the toy business worldwide. The success was not only in Japan, but also in Europe, North America, South America and Asia. People couldn’t live without these cute little monkeys. Until the mid 90’s Monchhichi was available worldwide, but then they disappeared slowly from the European market. Despite some slowdown in Europe in the mid 90’s, Monchhichi continued to be available in many countries throughout the world. In the year 2004 ( at the 30 years anniversary) the babies were introduced called: Bebichhichi” The designers at our Tokyo head office are creating new models continuously, so that there is always something new for everybody. In 2006 Sekiguchi opened their European Sales office, which will secure the availability on the European market. &nbsp;