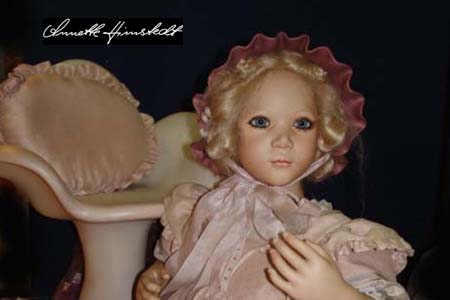 In 1948 in Bad Lauchstadt near Meseberg (Leipzig) Annette Himstedt was born. This is roughly 300km east of Paderborn and about 600km from Breda. She grew up, from age four onwards, in the Falkensee on the outskirts of Berlin. She had a four year older sister with whom she walked to school every day. For her, at the time, this was an adventure.

We got a message from Annette Himstedt that production is coming to an end. The summer collection of 2008 will sadly be the last. We look back at a pleasant co-operation between Annette and her workers and ourselves. After 22 years this will come to an end. Luckily we still have various models from this year and the previous years in stock. For now we can still sell the Himstedt dolls to the fans. If you have any interest in the current or previous collections let us know as soon as possible. We would love to see you in our shop in Breda for Annette Himstedt or one of the 60 other dolls artists and factories.

Goodbye to the Annette Himstedt atelier

In 1986 I produced my first Vinyl collection, now, 23 years later I’m closing my factory. There were plenty of successful years, also some tough ones. My first and foremost goal was always “fun, and the ambition to keep improving the dolls”. Throughout the years I proposed a lot of changes- and made quite a few of them, because the doll market kept adjusting and changing, something I am not entirely innocent of. To keep getting better, keep working with higher quality, this resulted that not only the collector but also the shop keepers became more demanding. The dolls kept getting more expensive to manufacture, because of the materials and the wigs but also because you needed a lot more employees to keep up. For the past few years I have had between 50 and 80 permanent employees. Add on to this that people’s belts were tighter: economical problems in a lot of countries, rising energy prices, and current problems with investments with the bank. This meant that people couldn’t really spend money like they did before. It kept getting harder especially because of the bad exchange rate for dollars. In the five years, between 2003 and 2007 we suffered a lot of loss. We hadn’t raised the prices for the American collector but because the dollar kept getting weaker our losses to America were so severe that we couldn’t achieve the American prices anymore. We had to raise the price in America as well, so that it was closer to the European price. For the American collector this meant a lot of money. But we just couldn’t keep the prices that low anymore. We maintained an exchange rate for $1.15 for €1 in reality it was closer to $1.60.

The truth is to keep a firm like mine, good quality dolls from Germany, in good condition we would have to sell a minimum amount of dolls per year. Sadly our numbers had stagnated.

Because of this my factory will close at the end of 2008. We will keep up the production of the summer kids and the orders that come in till mid November will be filled.

I think the last collection will be as popular as the one from 1986 the dolls will definitely increase in worth.

I have spent almost a quarter century in my factory with blood, sweat and tears, and of course idealism.

I enjoyed working with my colleagues. I would like to thank them for all the hard work and all the effort put into it.

I would like to thank the collectors and the shop keepers for their loyalty to my dolls for all these past years.

In this time frame I have experienced some of the best but also some of the worst moments of my life, but the joy I could give to collectors and the worldwide lovers with my dolls was a constant motivation to keep creating.

I hope, that Himstedt collectors will treasure the dolls that were made here forever.

In one way or another I will stay in the world of dolls, not quite sure how, but what is sure is that it won’t be with a factory.

And the best to you all