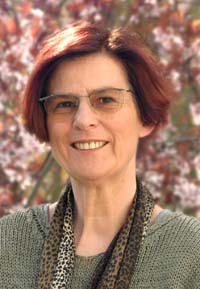 “When I was a kid my favorite thing to do was to play with other children’s doll, I didn’t have any myself. When my own children were grown up, I wanted to make children’s dolls for myself, which I could put around me and ones people could love.”

Wiltrud Stein (born in 1940 in Eberswalde, Germany) loved to play with dolls as a child, but the really beautiful ones were unavailable to her just after the war. She is still an admirer of Käthe Kruse.

Now that her children are grown up she has time to spend on her hobby: making dolls. She started (like Käthe Kruse) with the making of cloth dolls, the faces were painted using pictures she took of her children. After a course in modeling Wiltrud Stein decided to make dolls after old children’s photos. Her first living model for her dolls was the boy next door. With this the foundation for making dolls was laid.

In 1983 Wiltrud Stein joined a competition and won second place (Frankfurt, silver in the category amateurs, not porcelain’, GDS). Encouraged by this success she held an open house day and her dolls were shown to whoever wished to see them. By doing this she quickly became more famous. In the years that followed she regularly got distinctions:

1984: Luzern, bronze, GDS. Her dolls could be seen at various exhibitions.

The working way of Wiltrud Stein Wiltrud Stein’s dolls are from porcelain (head and limbs), cloth and leather (body) and the eyes are painted. Wiltrud Stein makes a model from clay and from this they make a cast in plaster. The model is consciously made very simple. Because of this the rougher models are also very simple and then she can give every face a different expression. In the still soft head she also writes her name: Wiltrud. After this she bakes them, sands them down, colors and bakes them again to burn in the color. The other pieces are also made, and then the doll can be put together. The head is attached to the chest piece, so they can attach strongly to the body, but still have movement in it. Wilturd Stein got, in exchange for doll, free lessons in the knotting of wigs from her hairdresser.

The clothes are made in the style from Wiltrud Stein’s own youth and that of her children. Boys got knitted vests according to an original pattern, with matching knee length trousers and mountain boots. In 2007 she released her last collection.