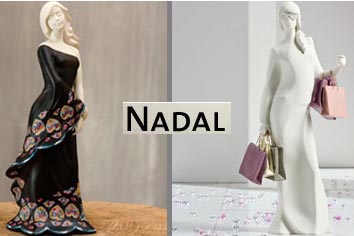 NADAL, was started, almost a century ago, in Spain. The place is called Mainise, a place that plays a major role in European ceramic art industry. NADAL  was created by Don José from Asunción Marqués (1890-1961), a boy from a farm. He didn’t want to follow in his parents footsteps and the family tradition was replaced by ceramics, with the ambitious motivation to start his own company. Her worked tirelessly in different factories in the city and researched new methods in his little laboratory, which he had made in his house. In 1915, when he was just 25 years old, but had a lot of experience in the world of ceramic techniques he fulfilled his dream and started NADAL, lovingly named after his wife Margarita Nadal. Together with his enthusiastic personnel, he started with the creation of ceramics and porcelain. It was of an amazing quality which the customers recognized very quickly. His only son, Don Jóse Asunción Nadal who was born in 1922, followed in his father’s trail. It is thanks to his undertaking spirit that the creations were exported across the entire world. In the international art world NADAL became famous in decorative art culture. In 1975 a new member of the Asución family was introduced into the company: Don Enrique Asunción Gabriel (born in 1953 as the grandson of the company’s founder) , he had the same passion for complicated art made from ceramics. Today NADAL is a completely modernized company and still sets the tone with the porcelain and ceramic figures. Together with his team of experts director Enrique Asucnción Gabriel’s NADAL offers the world’s best service to a lot of her customers. “We guard the secret of the technique  strictly. At the same time we continue our search for new materials and ways in which we can add the quality of other production to our assortment.” Copyright Hesemans 2014